There are four subpuzzles in this puzzle, corresponding to L, LO, LOL, and LOLO respectively. This was intended to be clued by the images on each tab, which progressively add a quarter of the complete image left to right. The main conceit of this puzzle is that each subpuzzle contains information about its adjacent subpuzzles.

The final clue phrase, when you combine the solutions to each subpuzzle, is GADGETMAN PARTNER. This admittedly obscure clue phrase solves to GIMMICK KID.

The second word of each clue is always an extra word. The first letters of these extra words spell out an intermediate phrase that hints at how to approach the word search in LO. Solutions to the clues are below. The answers that can't be symbolized by the letter L (clued from the LOLO subpuzzle, see LOLO tab) create the clue phrase for the answer to this subpuzzle, namely BLANK FLY EQUALS METAPHOR FOR SOCRATES IN APOLOGY. This solves to GAD.

You can find "greetings" in various languages in the word search. Each greeting has an extra letter inserted, as hinted in the L subpuzzle. 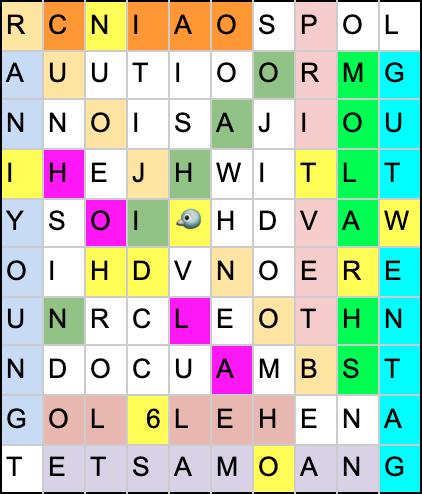 The leftover letters in the word search spell out the answer phrase to this puzzle: SOLUTION IS JEWISH DIVORCE DOCUMENT, which solves to GET.

If you order the greetings by the language of the countries seen in the LOL subpuzzle and take the extra letter, you get a clue phrase for how to extract from LOL.

As per the clue phrase in LO, taking out the 6th word of each Tweet gives the answer phrase: ACCORDING TO DRACULA IT'S A MISERABLE PILE OF SECRETS. For those unfamiliar with Symphony of the Night (or Malraux's Anti-Memoir), this solves to MAN.

The punny words in each Tweet give an instruction for how to extract from LOLO, namely to trace out seven monsters, followed by a list of seven monsters.

Each level can solve to a word using the correct extraction method.

Level 7: RNA/Amino Acids (Extract the highlighted letter from each monster name to get the RNA base they represent.)
(medUsa, Gol, roCky, Alma respectively.)
Solution: LETTER

Together, this forms the intermediate phrase IGNORE ANSWERS SYMBOLIZED WITH THE THEMATIC LETTER, which is a clue for how to extract the subpuzzle L.

Tracing out the monsters from the clue phrase in LOL yields the solution for this subpuzzle, PARTNER.

Firstly, I'd like to thank Chris (Cold) for designing the Adventures of Lolo 3 level editor engine that I used to construct the maps in the LOLO subpuzzle. It was immensely helpful. Also, the structure of this puzzle was slightly inspired by a round in the Mezzacotta/CISRA hunts that used a very similar gimmick where puzzles fed into each other. There have been other great hunts that used a similar mechanic, but I first found this sort of thing in Mezzacotta, so shout-out to those authors as well.

This puzzle was originally constructed to have all subpuzzles feed into each other and it was much more complicated. There was simply too much going on in the initial draft, and it was very difficult to come up with a design scheme where every interaction was useful and not superfluous. I eventually settled for a model in which each subpuzzle fed into its adjacent partners. Because our hunt was designed to be easier, I worked to make sure that each subpuzzle's mechanisms were fairly straightforward (but hopefully still fun).

Sometime between the hunt launch and the playtests, we discovered that Google changed their indexing around GADGETMAN PARTNER a bit, so it was harder than usual to come up with the final answer. It used to be that GIMMICK KID was the first result if you searched for that phrase without quotes. As a result, we made the response for the GADGETMANPARTNER give explicit instructions on finding the answer. Of course, this answer had a lot of submissions related to Inspector Gadget and the Richard Ayoade show. Apologies to anyone frustrated with the last step! It seems the vast majority of teams managed to get there eventually, though.