The filled grid is:

For the 4 yellow rows, the true answers to the crossword clues do not quite fit. In fact, each of those rows contain one answer containing “BREAD” and another containing “FILLING”, and these letters are replaced in the grid by seemingly random letters. 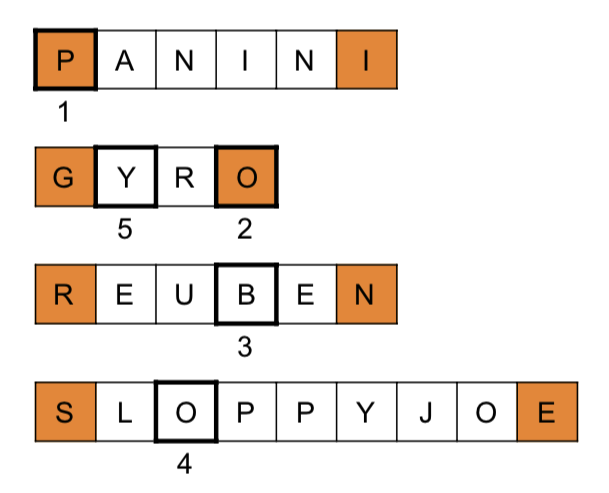 The brown squares here are meant to connote bread. Reading the squares with numbers below them in number order, we get the answer, which is also a sandwich: PO BOY.

I came up with the sandwich-themed extraction idea after seeing the suggested answer of PO BOY. It was at this point that we realized that we had written most of the hunt without a single crossword, and thus I made the decision to adapt my extraction on top of one.

Since I was a relative newcomer to writing crosswords, this was more difficult than anticipated. There was a delicate balance between making the clues too easy and making the extraction impossible due to not having enough entries from which to extract. This was particularly important for the down clues, which all (except one) crossed answers that didn't quite fit, and even more true for the down clues that crossed letters that would become sandwiches. In my initial version, the clues were too hard and obscure to support the extraction. Alison, Ryan, and Melissa provided a lot of help in testsolving and then proposing improvements to get it to its final state.